A new vaccine could help curb one of the nation’s biggest koala killers, with experts hoping the injection could protect the species from future extinction.

Experts estimate that more than half of the koala populations in New South Wales and Queensland have chlamydia, and researchers have worked for more than a decade to create a vaccine.

Dr Michael Pyne of the Currumbin Wildlife Hospital said of 500 koalas admitted to the Gold Coast hospital last year, 60 per cent had the disease.

“I really fear that if we don’t find a way to manage chlamydia, there will definitely be a loss of a number of koalas,” he said.

Clinical trials of the vaccine launched by the University of the Sunshine Coast began in October last year.

At the Currumbin Wildlife Hospital, 155 koalas received their bites.

A koala patient named Kassidy is now healthy and nursing a joey.

“We actually suspected the boys were very interested in her, so we’ve been following her closely and catching up with her recently and she had a two-month-old joey in her pocket,” Dr Pyne said.

The hospital is currently closely monitoring eleven of its released koalas, and all have remained chlamydia-free.

The hope is that the vaccine can be administered on a larger scale, thereby protecting koalas from infection.

“The hope is that this can be rolled out much more widely,” Dr Pyne said. 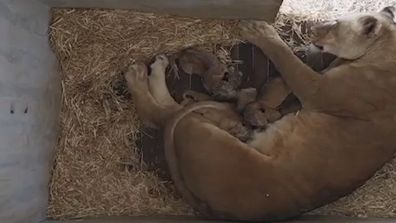 “The goal is to know exactly where that threshold is for the number of koalas we need to vaccinate to stabilize things and get breeding rates back up.”