Bitcoin Classic has been supported by the BitKeep wallet

What is the BitKeep wallet?

BitKeep is one of the world’s leading decentralized multi-chain cryptocurrency wallets, which supports cryptocurrencies including BTC, ETH, BSC, HECO, and other cryptocurrencies. It has provided reliable digital currency asset management services to nearly ten million users worldwide and is also a necessary tool portfolio for current DeFi users. Among them, the number of monthly active users exceeds 1 million, and BitKeep users cover more than 50 countries and regions, with overseas users accounting for more than 60% of the total number of users.

BitKeep received tens of millions of investments from Jingwei Venture Capital in May 2018 for research and operating expenses. Founded in 1977, Jingwei Venture Capital, headquartered in Boston, USA, is one of the oldest venture capital funds in the United States, focusing on investing in early entrepreneurial firms, with the names of Sequoia Investment and KPCB in the United States.

What is a Bitcoin Classic?

Bitcoin Classic, abbreviated as BGH, issued 210 million copies and was born from a hard fork at the height of the bitcoin block at 630,000. It is an optimized and upgraded version of the bitcoin chain d origin, which improves the speed of transactions, reduces transaction costs and deploys a lightning network.

Bitcoin Classic aims to create a comprehensive peer-to-peer electronic payment system that takes a party out of finance.

The agency pays directly to the other party; the Bitcoin Classic network is based on cryptographic evidence rather than a letter.

Ren, allows any party with this willingness to transfer directly to each other without the need for a trusted third party company.

Calculated irrevocably, this will protect the seller’s rights against fraud, and the regular retention mechanism is simple.

Perform to protect the rights and interests of the buyer. 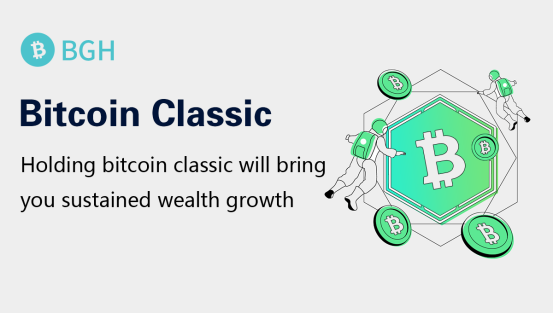 Owning Bitcoin Classic will bring you sustained growth in wealth

The conclusion of an ecological cooperation has contributed to varying degrees to the green construction of Bitcoin Classic and BitKeep; for BitKeep, Bitcoin Classic brings user traffic to it and enriches the diversity of asset species of the BitKeep platform. For Bitcoin Classic, BitKeep offers global Bitcoin Classic users a more convenient and faster way to improve their assets, prompting Bitcoin Classic to circulate better globally and build global consensus.