Curious Kids is a series for children of all ages. If you have a question you’d like an expert to answer, send it to curiouskidsus@theconversation.com.

How did cockroaches survive the asteroid that led to the extinction of the dinosaurs? – Kinjal, 11, Delhi, India

When the rock now known as the Chicxulub impactor fell from outer space and slammed into Earth 66 million years ago, the cockroaches were there. The impact caused a massive earthquake, and scientists believe it also triggered volcanic eruptions thousands of miles from the impact site. Three-quarters of the plants and animals on Earth died, including all the dinosaurs except for some species that were the ancestors of today’s birds.

How could cockroaches a few centimeters long survive when so many powerful animals disappeared? It turns out they were well-equipped for a meteoric disaster.

If you’ve ever seen a cockroach, you’ve probably noticed that its body is very flat. It’s not an accident. Flatter insects can squeeze into tighter places. This allows them to hide virtually anywhere – and it may have helped them survive the impact of Chicxulub.

Cockroaches have a flat body which helps them squeeze into small spaces. They are also strong and fast.

When the meteor hit, temperatures on the Earth’s surface soared. Many animals had nowhere to run, but cockroaches could take shelter in tiny crevices in the ground, which provide excellent protection from the heat.

The meteor impact triggered a cascade of effects. It kicked up so much dust that the sky darkened. As the sun went down, temperatures dropped and conditions became wintry all over the world. With little sunlight, the surviving plants struggled to grow, and many other organisms that depended on those plants went hungry.

No cockroaches, though. Unlike some insects that prefer to eat a specific plant, cockroaches are omnivorous scavengers. This means they will eat most food from animals or plants as well as cardboard, some types of clothing, and even poo. Having appetites that aren’t picky has allowed cockroaches to survive lean times since the Chicxulub extinction and other natural disasters.

Another useful trait is that cockroaches lay their eggs in small, protective cases. These egg cartons look like dried beans and are called ootheca, which means “egg cases.” Like phone cases, egg cases are tough and protect their contents from physical damage and other threats, such as flooding and drought. Some cockroaches may have waited out part of the Chicxulub disaster from the comfort of their egg cases. 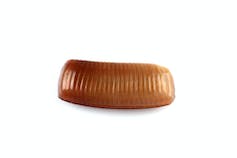 Cockroach egg cases are about 10 millimeters long and contain up to 50 eggs, depending on the species. VitalisG/iStock via Getty Images

Modern cockroaches are small survivors that can live just about anywhere on earth, from the heat of the tropics to some of the coldest parts of the globe. Scientists estimate that there are over 4,000 species of cockroaches.

A handful of these species like to live with humans and quickly become pests. Once cockroaches have established themselves in a building, it is difficult to rid every little crack of these insects and their egg cases. When large numbers of cockroaches are present in unsanitary places, they can spread disease. The biggest threat they pose to human health comes from the allergens they produce, which can trigger asthma attacks and allergic reactions in some people.

Cockroach pests are difficult to manage because they can withstand many chemical insecticides and because they have the same abilities that helped their ancestors survive many dinosaurs. Yet cockroaches are much more than a pest to control. Researchers study cockroaches to understand how they move and how their bodies are designed to get ideas for building better robots.

As a scientist, I see all insects as beautiful six-legged inspirations. Cockroaches have overcome obstacles too big for dinosaurs. If another meteorite hit Earth, I’d be more worried about humans than cockroaches.

Hello, curious little ones! Do you have a question you would like an expert to answer? Have an adult send your question to CuriousKidsUS@theconversation.com. Please let us know your name, age and the city where you live.

And since curiosity has no age, adults, let us know your questions. We cannot answer all questions, but we will do our best.

Brian Lovett does not work for, consult, own stock, or receive funding from any company or organization that would benefit from this article, and has disclosed no relevant affiliations beyond his academic appointment.

This article is republished from The Conversation under a Creative Commons license.