The state must take seriously the conservation of its lands and the protection of the staging areas that dot the landscape to ensure that birds continue to visit this place.

The 5th edition of the two-day Goan Bird Festival is scheduled to begin today at the Dr. Salim Ali Bird Sanctuary, Chorao-Panaji. The Forestry Department hopes to raise awareness, ensure conservation and promote native and migratory bird species. Large numbers of bird watchers and nature photographers are expected to gather and observe the 450 species of birds that have been spotted in Goa so far. 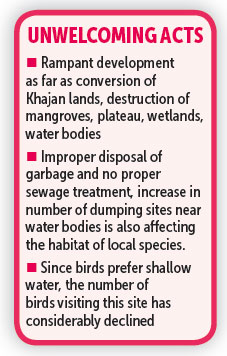 Environmentalists in Goa, concerned about the destruction of the state, are more than eager to give their opinion. Environmentalist Rajendra Kerkar said: “Rapid deforestation, unpredictable seasonal patterns, unsustainable development, increasing air pollution, destruction of wetlands and water bodies are the main reasons for the decline. of the bird population. Goa is a rich source of biodiversity and is home to over 450 species. Goa is a famous destination for tourists and is the destination of great flora and fauna. Each individual will have to work altruism to protect their ecological heritage. ” 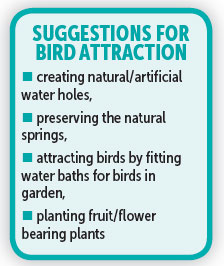 Bird watcher and nature enthusiast, Prasanna Parab, said Goa was doing well in terms of monitoring, but regretted falling behind in conservation. He said: “The last decade has been a good one in terms of birdwatching. To watch is one thing and to act is another. The state government has officially declared the six lakes (Xeldem and Nanda lakes in Quepem, Toyyar in Chimbel, Dashi in Revona, Sarzora in Chinchinim and Lake Cotambi) as wetlands, but the ratio of wetlands to infrastructure development is completely imbalance. The rate at which development work is being done destroying the ecosystem is more than the effort to conserve it, ”Parab said. He lamented that the conversion of Khajan lands, destruction of mangroves, plateaus, wetlands, bodies of water had taken place to create structures, but a similar pace was not visible in the attempt to conservation of natural resources. 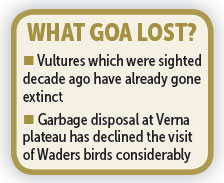 Parab claimed that all activities related to awareness, bird trails, pre-bird festival walks, seminars, webinars and bird watching were short-lived and would only last until the last. festival day. “From its end, until the following year, no incentive program or activity is required to act,” Parab said. In Goa, the presence of the hornbill was the mark of a rich deciduous forest. Cutting down trees has resulted in ecological imbalance and destruction of natural habitat. The change in status of the Great Hornbill and the Malabar Pied Hornbill (endemic to Western Ghat) to “Near Threatened” suggests the same thing. Research has revealed that electromagnetic radiation emitted by cell phone towers ruptured the sparrow’s eggs and embryos. The rate of decline of the sparrow population is the hard truth that is visible. The alteration of anthropogenic pressure patterns also affects bird habitat. 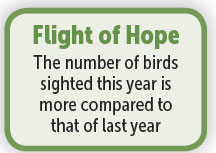 Improper waste disposal and lack of proper wastewater treatment, increasing number of landfills near water bodies are also affecting the habitat of local species. Kerkar said that creating natural / man-made water holes, preserving natural springs, attracting birds by installing bird waterbaths in the garden, planting fruit / flowering plants will help protect the bird population . Identifying and mapping critical sites for migratory birds, carrying out bird surveys, protecting wetlands and hot spots should be priorities, he concluded. “In terms of diversity there is no decline, but in terms of density the bird population is in decline,” said Parag Rangnekar, founding member of the Goa Board Conservation Network (GBCN) and member of Goa. State Biodiversity Board (GSBB). Climate change and disruptions in the migratory trajectory are the main reasons for this decline. The birds travel a long distance from north to south where they stop at sites to rest / drink. These sites are referred to as “assembly grounds”. Goa has many shores, mud flats, mud flats, wetlands. In addition, the State has sufficient data regarding the location of staging areas. Keeping these assembly grounds functional is of the utmost importance. He went on to say that the State of Goa is aware of the need for conservation, but the people are not taking action. Omkar Dharwadkar, naturalist and president of GBCN, said habitat degradation and disturbance of breeding grounds were the cause of the decline in the bird population. However, he pointed out that the number of bird species had decreased but at the same time new species were now present. This implies that the birds have adapted to the changing weather conditions, Dharwadkar said. A once large population of Northern Pintail (a species of migratory duck) that was sighted some 15 years ago was now nearly extinct, he said. He called on the general public to handle their waste responsibly, especially single-use plastic, to protect the air population. The number of birds seen this year is higher than last year, said Mandar Bhagat, bird researcher. “The destruction of habitat hot spots is the main reason affecting the migration of various species of birds. The classic example can be that of “Carambolim lake”. The rice fields being left fallow, the water of the lake remains unused. Lake Carambolim remains inundated with water all year round, which is unfavorable for visiting birds. As birds prefer shallow water, the number of birds visiting this site has decreased significantly. Barely 10 percent of the population compared to ten years ago can be seen today, ”Bhagat said. “On the positive side, new hotspots are also being created in Raia, Loutlim, Navelim in South Goa. This year, a rare Long-billed Dowitcher was sighted between Raia and the Loutlim border for the very first time, ”Bhagat added. Migration route of migratory birds during the winter season and few are summer migrants. Species sightings have increased this month compared to last, said Ramesh Zarmekar, chief naturalist at Nature’s Nature Complex. The vultures that were seen ten years ago have already disappeared. Garbage disposal on the Verna Plateau has greatly reduced the visit of wading birds. You cannot use pesticides and kill everything for your own greed. Birds rather than every natural factor is just as important in maintaining the balance of the food chain and ecosystem, he added.