New research has warned that Regent Honeyeater will disappear within 20 years unless conservation measures to protect it are urgently strengthened.

Eight decades ago, Regent Honeyeater dominated the flowering gum forests of Australia, being easily seen in large numbers. John Gould, one of Australia’s first European naturalists, observed them “huge flocks among the paintbrushes of New South Wales”. He described Regent Honeyeater as “the most pugnacious bird he had ever seen”, noting that it “reigned supreme over the tallest and most flowering trees”. Their success in securing nectar supplies has made them vital pollinators.

Since Gould’s time, the population of Regent Honeyeater has collapsed alongside the loss of over 90% of their preferred woodland habitats to agricultural land.

Fewer than 300 Regent Honeyeaters remain in the wild in Australia, and their numbers continue to decline (Lachlan Hall).

Although there are still large tracts of forests in Australia, these are often found on poorer soils and hilltops. The remaining forests do not produce the rich nectar that Regent Honeyeaters need to reproduce.

As their habitat declined, the surviving Regent Honeyeaters were forced to compete with larger species – without the security of their huge herds. The result is that the once common species no longer reigns supreme.

The decline of Regent Honeyeater has been known since the late 1970s. In response, a recovery team including BirdLife Australia and the Taronga Conservation Society launched a long-term recovery effort to protect habitat, plant new trees and release birds raised in zoos. These efforts have slowed but not stopped the decline, and it is now feared that the remaining wild birds will be lost forever within two decades.

In 2015, a large-scale survey began to better understand the population decline. Regent Honeyeaters are notoriously difficult to study in the wild due to their nomadic behavior. Six years of intensive field work, combined with data from research in the 1990s and long-term bird banding, means that scientists have finally gathered enough information to be able to understand the challenges facing confronted the few remaining wild birds.

Breeding success is now known to have declined because their nests are raided and chicks killed by aggressive native species, with Noisy Miners being a particular problem. The remaining wild birds are losing their song culture due to the lack of older birds for the fledglings to learn their songs. 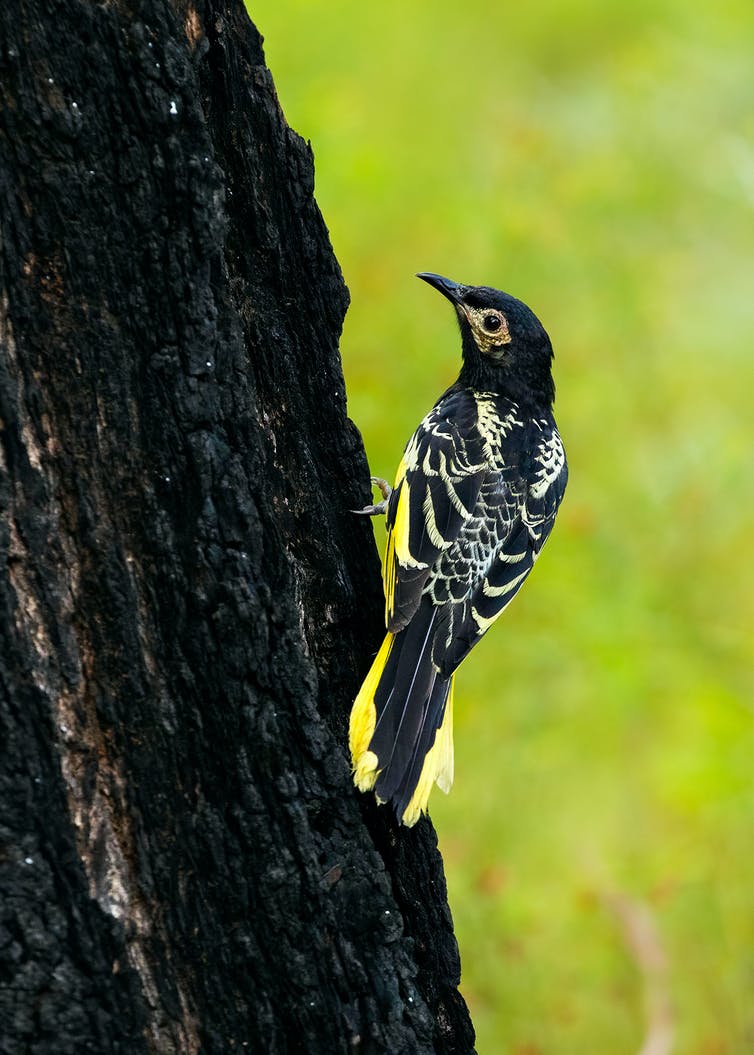 The remaining Regent Honeyeaters ‘forget’ their song, due to the lack of older birds to learn it (Lachlan Hall).

Fieldwork yielded accurate estimates of vital breeding data, such as the number of young birds fledging for each adult female, the number of birds breeding, and the survival of juveniles. The researchers combined this with data from decades of monitoring birds raised and released in zoos to create population models, which allowed them to predict the future of the wild population under different conservation scenarios.

Models show that time is critical. To have a chance of saving Regent Honeyeater, the numbers must be high enough that they can move in large herds for protection.

To do this, conservationists need to nearly double the nesting success rate of wild and released birds in zoos. Too many young birds die prematurely; Regent nesting honeyeaters should be located early in the breeding season and protected from noisy juveniles, pied currawongs and even opossums.

Despite decades of hard work, Regent Honeyeater is still on the verge of extinction. The researchers conclude by saying that to recover the wild population of Regent Honeyeater, the next five years will be crucial to implement the most effective conservation strategy.

They add that “we need to think bigger” if the species is to be preserved, and large-scale habitat restoration is also a critical factor alongside captive breeding. Without it, releasing the birds and protecting the nests could ultimately prove futile.

Heinsohn, R, Lacy, R, Elphinstone, A and 8 others. 2022. Population viability in data-deficient nomadic species: what it will take to save regent honeyeaters from extinction. Biological preservation. DOI: https://doi.org/10.1016/j.biocon.2021.109430

This article is based on documents and information published by Rob Heinsohn, Dejan Stojanovic and Ross Crates in an article on their research on The conversation.