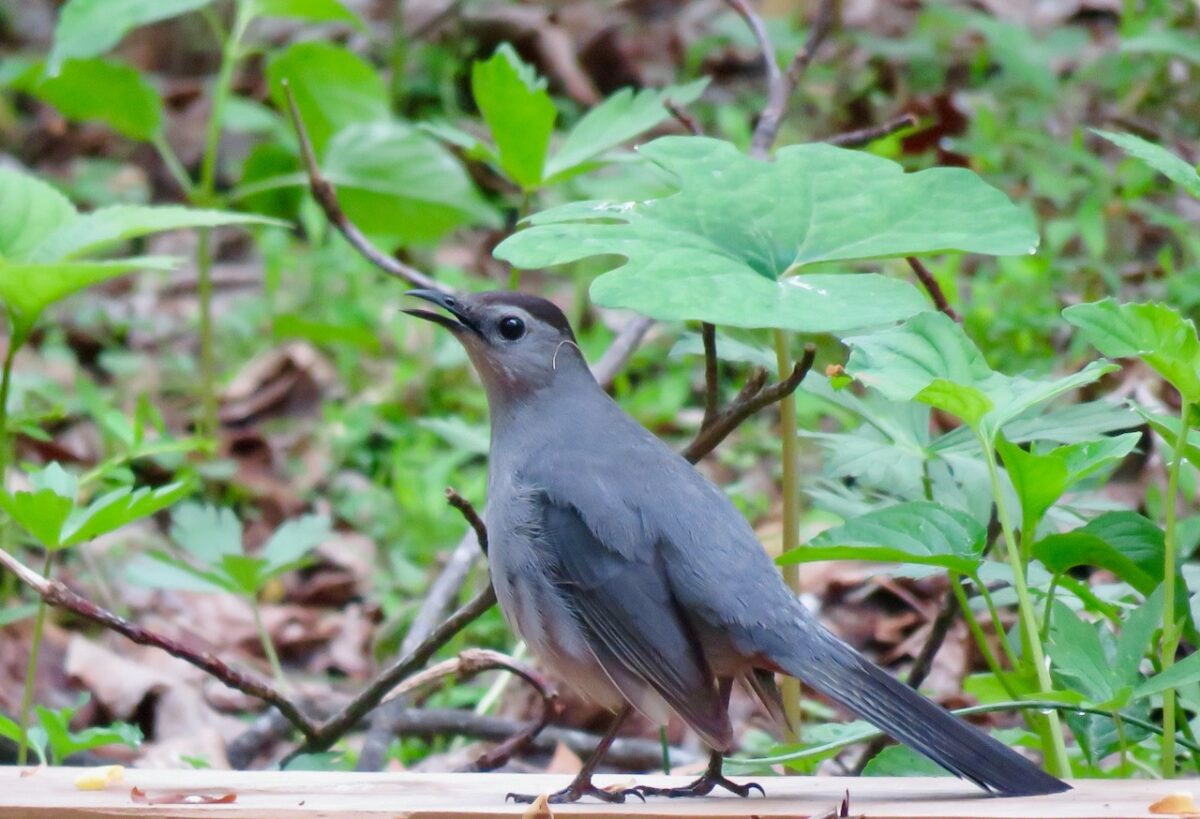 Sometimes, sitting outside in Appalachia in the shade thinking about what to write on Sunday, I wonder how to write gorgeous, pretty sentences. Maybe the key is to write about pretty stuff, not bad news. I do not know.

I even googled it, and there are peddlers making money trying to teach people to write by talking about such things on the web.

Working primarily as a news writer, however, I don’t often worry about such things. When you’re producing information to inform readers, you don’t have a lot of time to worry about style. Not after doing this for 40 years, anyway.

When I tried to teach students how to write news stories at various universities for a decade, I used the same conventions passed down to me from other professors and books.

The inverted pyramid style; answer the who, what, when, where, why and how.

It’s not always pretty, but it gets the job done.

But when I take the time to pursue a more leisurely approach, like on Sundays where I try most weeks to write an essay or column, I want to be a little more specific and precise.

Of course, I took the time to study EB White during my undergraduate studies in Alabama, when Bear Bryant was still alive and dominating the country on the football field. But so many years later, I don’t remember much of his advice except to be succinct and not use big words.

While searching online this morning, I found a quote from an interview he did before his death in 1985.

“The approach to style goes through simplicity, simplicity, order, sincerity,” he said. “Writing is, for the most part, laborious and slow.”

This was in the 20th century, however, when the pace of life was much slower than it seems today, when writers used pens and paper and perhaps a typewriter.

It’s been a long time since writing was slow for me. I am trained in first generation computing.

Of course, I don’t spend my time making up fictional stories. The facts of a story determine what you write about, and some stories almost seem to write themselves – once you train your brain and fingers in conventions.

The rest of the quote is: “The mind travels faster than the pen; therefore, writing becomes a matter of learning to make occasional wing beats, knocking down the fast-passing thought-bird.

It’s an interesting analogy that I can relate as well – although writers don’t use pens much anymore – and not just because I’ve been thinking about birds a lot lately. When you think of something good, it’s important to write it down as soon as possible before you forget it.

But it’s true that the season for the spring bird migration is here where I landed for the summer, in the Catoctin Mountains, and this enchanted-looking forest is filled with birdsong.

Now, identifying what you’re hearing is as easy as opening the Cornell Bird ID guide on your iPhone, opening the brand new Merlin app, and pressing the button to make a short recording of birds chirping in the trees. No more searching high and low with binoculars or a long camera lens.

At this time of mid-May, at this location, in addition to the usual suspects like American Robins, Northern Cardinals, Blue Jays and Red-bellied Woodpeckers, one of the most common songs you hear is the clear and fluty ee. oh-lay wood thrush song [Hylocichla mustelina].

If you sit still and pay attention, this beautiful song echoes through the hardwood forests of the eastern United States in spring and summer. The wood thrush is an accomplished singer and can sing “internal duets” with itself. In the final trill phrase of his three-part song, he sings pairs of notes simultaneously, one into each branch of his y-shaped syrinx, or voice box. The two parts harmonize to produce a haunting ventriloquial sound, according to Cornell scientists. 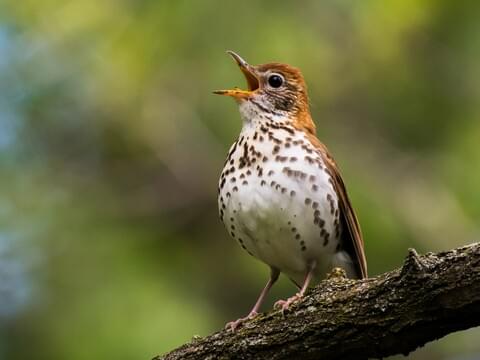 A wood thrush singing its distinctive song: Cornell via Google.

In many songbird species, males compete by “song matching” – responding to a neighbor’s song with the same song, perhaps seeing which male can perform it best. Wood thrush males are different. They almost always respond to one rival’s song with another.

The cinnamon-brown upperparts of this reclusive bird are good camouflage as it forages for leaf-litter invertebrates deep in the forest, though it frequently rears up to look around, revealing a boldly spotted white breast. Although still numerous, according to Cornell, its rapidly declining numbers may be due in part to parasitism of cowbird nests near habitat fragmentation and acid rain depletion of its invertebrate prey.

Getting a good shot of one isn’t that easy, though, but I’ll keep trying. I should have tried harder last year when I saw two wood thrushes following a timber rattlesnake into a nearby campground.

However, getting photos here turned out to be easier with the black eyed juncos, as they seem to complain all the time. 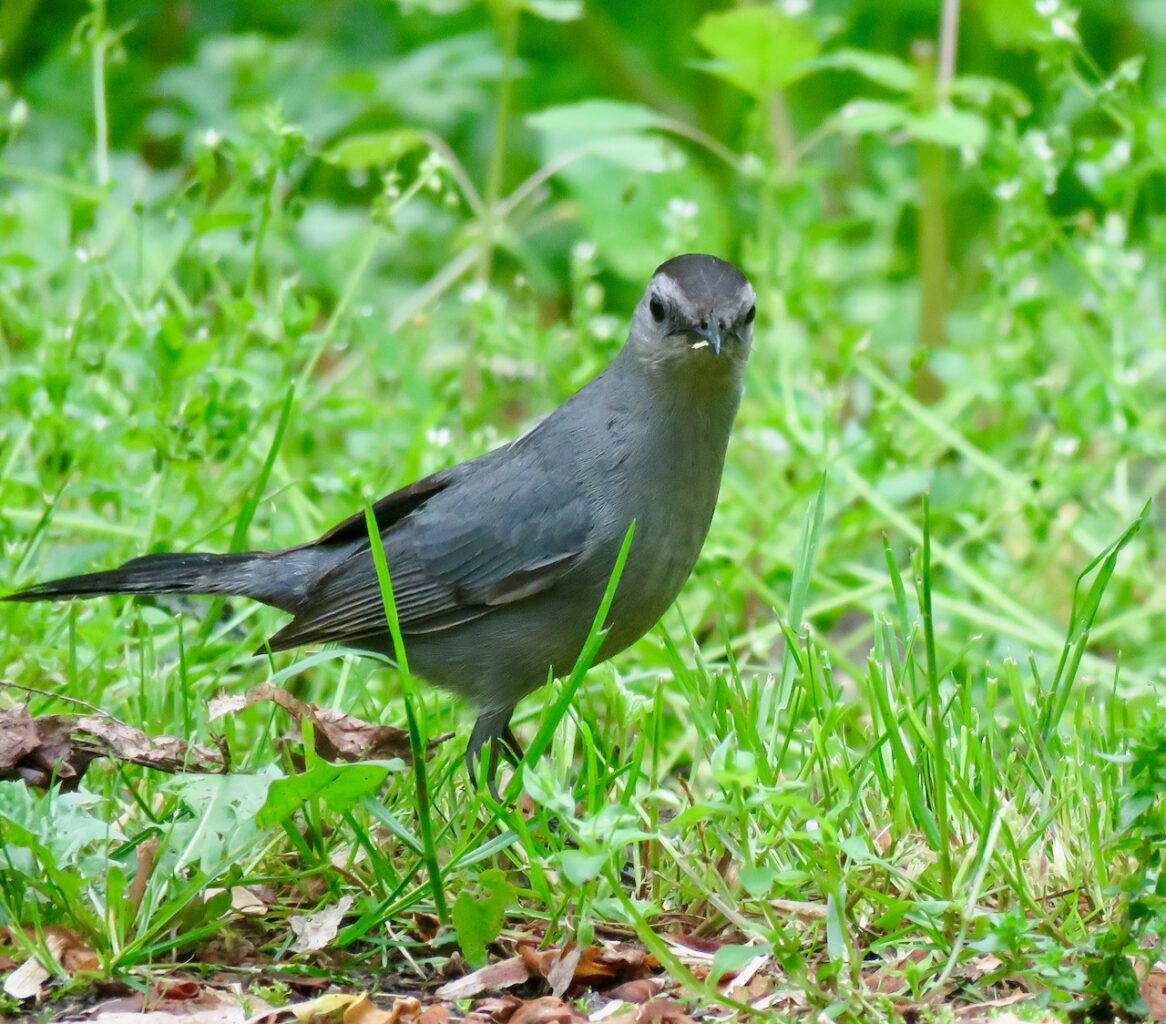 Slate Juncos [Junco hyemalis] are neat, even flashy little sparrows that hover over the forest floors of the western mountains and Canada, then flood the rest of North America for the winter. I’ve noticed them a lot in Shenandoah National Park over the years, and here in Catoctin. They are easily recognized by their distinct markings (although extremely variable) and the bright white tail feathers they usually flash in flight. The dark-eyed junco is one of the most abundant forest birds in North America. Look for them on walks in the woods as well as in herds at your feeders or on the ground below them.

Juncos are the “snowbirds” of mid-latitudes. In most of the eastern United States, they appear with the onset of winter, then retreat northward each spring. Other juncos are year-round residents, retreating to the woods during breeding season or, like those in Appalachia, moving to higher elevations during the warmer months – places like Shenandoah and Catoctin, kinda like me these days.

According to the Sound ID app, these woods are also now filled with American redstarts, red-eyed vireos, forked birds and I even took a recording of a scarlet tanager on Friday. I never saw it. I didn’t have a photo. But I recorded the sound.

The Cornell site also has sound recordings. I haven’t figured out yet how to share the .wav files on my phone in the app to Facebook.

But maybe you’re more interested in the abortion protests on the National Mall in DC anyway. Sorry. Sometimes I need to take a break from such things, and I recommend that you do too.

I have photos to share soon of a few hiking trails that I’m only just beginning to explore.

See you on the road or on the track, dear friends, fans and followers. Maybe you found a cute phrase here somewhere worth sharing with your friends.

If you support truth in reporting without a paywall and fearless writing without contextual ads or sponsored content, consider making a contribution today with GoFundMe or Patreon or PayPal.